Creosote in Chimneys: How it’s formed and why it is a fire/carbon monoxide risk 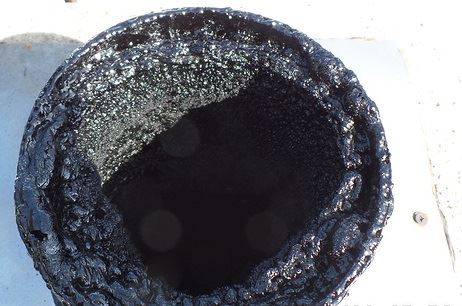 Sadly many Working to minimize creosote build-up is the goal of every person burning wood. It is true that all wood burning will create some creosote, it is simple chemistry really. As the wood heats, it releases a complex hydro-carbon in gas form, which is actually what is burning. Any of this gas which is not burned will make its way up the chimney. If the chimney is less than around 120C the gases will condense into a liquid form; I did say chemistry. That liquid will harden and become what is known as creosote. All systems will produce creosote – some much more than others due to either the installation or the operator.

Some common reasons why creosote forms in a chimney include:

Burning wet fuel – unseasoned – greater than 20% moisture level.
Burning the stove at too low a level – inadequate oxygen for complete combustion of the gases – although while the newer stoves will minimize this older stoves do not have any ability to control this.
Flue which is sized far too large for the stove or appliance – allowing gases to cool more before reaching top and taking much longer to heat the chimney walls.
Where chimney is located – when on interior of house it will warm faster and reach point where condensation no longer occurs.
Chimney material – stainless steel will heat much faster than masonry chimneys.

Burning your stove at a hot enough temperature will help a lot. I did not say over-fire or burn too hot, as that leads to other problems. However, in many cases systems burned at a reasonably hot temperature and maintained hot all heating season long have minimal creosote deposits. Does that mean these do not need to be cleaned? No, they still need cleaning and there are science reasons for that, but that is another blog.

Burning fuel at low temperatures is the primarily cause of creosote for most and here is why. Now some will say that burning at low temperatures creates smoke rather than heat. Well actually that is not scientifically accurate. Wood in the solid form does not burn, it is the gases released which burn.

However, wet wood will also release a lot of water vapour as well as burnable gases. The gases that do burn utilize a lot of their heat energy (btu’s) in drying the wood and with the mixed water vapour a lot of the remaining gas is simply not properly consumed and makes its way to the chimney. Burning at too low a setting in older stoves has similar problem for different reasons – inadequate oxygen enters the firebox – combustion needs oxygen to complete the fire triangle – incomplete combustion means gases again making their way up the chimney. This gas flowing up a cool chimney condenses on the walls, like the steam during a shower on the mirror hanging on the wall.

Cool fires equal a cooler chimney, more unburned gases and greater creosote formation. Once the gases have condensed, they will dry over time, if these dry slowly a hard and shiny form of creosote appears which is virtually impossible to sweep without professional tools. If it drys quickly then it becomes flaky and is much easier to remove – most people have at least some of both present in their chimney and pipes.

Essentially the lower the flue temperatures, the higher the probability of creosote formation. Once creosote is in the system it needs to be removed. The research has shown that as little as 2mm of creosote can sustain a chimney fire – and if there is 3mm the fire codes says it must be cleaned. Creosote in the chimney, any chimney, is a major fire/carbon monoxide risk.

In serious cases of glaze build-up, a chemical treatment will needs to be applied. This modifies the creosote and makes it more easily removable. Early season sweeping is often a good idea as creosote during the summer months can also cause an odour to come from the chimney and enter into the home, more prominent on high humidity days.

In a nutshell.. use dry and properly seasoned wood. Burn the fire at a temperature hot enough to consume the gases present in the firebox (different with stove types – and vintage), have chimney properly cleaned as necessary (minimally every 2 to 3 full cords of wood – but can be sooner with masonry chimneys or poor wood quality).

Sadly we have seen many contractors, with no Sweep Certifications or credentials offering services in chimney cleaning.

Why a Certified Sweep? Well there is more to cleaning properly than pushing soot around, and we have seen more than one chimney which had been apparently cleaned already and was simply a mess!  Yes there is a VALID REASON the credential and certification exists! Protect yourself, your family and get PEACE of MIND.